LA3 Correspondence in the Gazette

The LA3 battle rumbles on. 1100 new homes are due to be built in West Hemel. As you go along Chaulden the back way into Hemel the development will be on your left stretching up the hill to the Hemel Hempstead Road. As part of the LA3 development - and a condition of the area being taken out of greenbelt -a gypsy and traveller site is planned for the corner nearest Winkwell. You'll see from the correspondence that the location of the site, far away from the main development, is in breach of government policy relating to traveller communities.  It presents clear traffic problems for all users and excludes the travellers from the community into which they ought to be integrated. This correspondence refers to the "stitch up" between the developers and Dacorum Borough Council.

Charlie, as chair of the Village Association, is the signatory on the letters, but the very hard work and determination of our planning committee also needs to be recognised. They have continued to work throughout the year to represent the interests of all local residents against the purely commercial interests of the hugely powerful developers. They deserve our gratitude.  Thank you John, Mike, Paul and Chris. 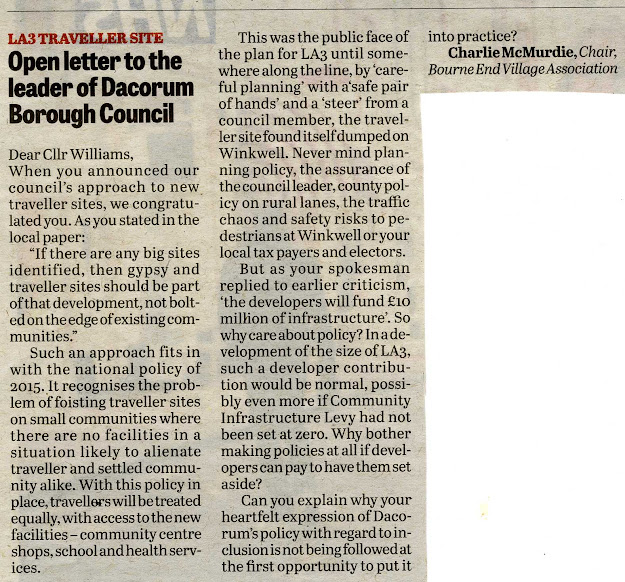 Reply from the Leader of Dacorum Borough Council, Andrew Williams 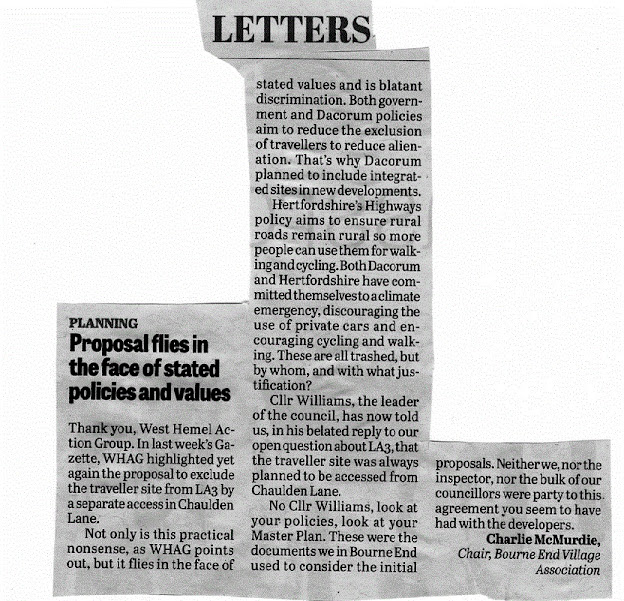 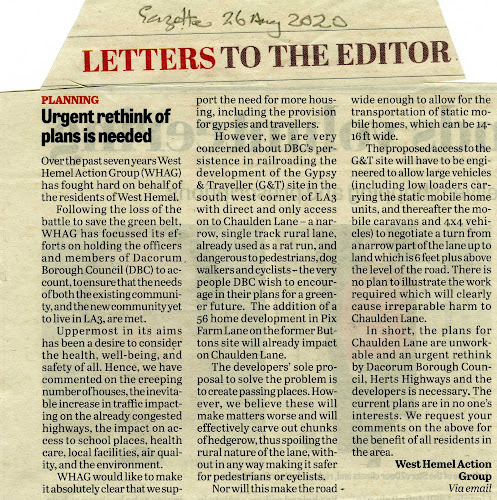 Popular posts from this blog

September 08, 2021
Gordon Rolfe, BEVA’s Chairman, has received a briefing note from Hertfordshire County Council regarding the Afghan refugees staying at the Watermill.   The document is reproduced in full below. Please note that they want us to stay away for about a month in order to allow these refugees some breathing space for their health and adjustment from the trauma they have experienced. Briefing Note – Afghan Migration and Refugees Resettlement Hotels Status Update 2 September 2021 Current numbers in the resettlement hotels* Hotel Number in hotel Hertsmere 1 39 Hertsmere 2 146 Dacorum 1 153   *these numbers can change daily and therefore only provide a snapshot in time. They are also based, in part, on those that the British Red Cross have registered Latest housing offers from Districts & Boroughs District/Borough Housing offer (by family) Dacorum B
Read more
February 11, 2021

Support a local resident in his charity work ....

October 01, 2015
Those of you who read the Bourne Ender (presumably all of you) will know about Kevin Connaughton’s charity work with a Burmese children’s charity in Thailand.  Kevin will be returning in November for several months to teach music in a school.  He is looking for an old style mechanical metronome.  If you have one you could donate to him for this charity work he would be delighted. Contact Kevin on: 07971 984870 or  kevinconnaughton@live.co.uk
Read more