Showing posts from July, 2015
Show All 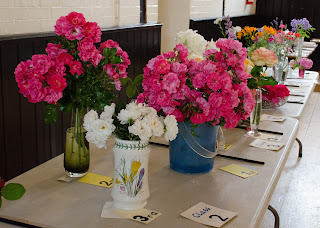 It was a nail biting finish to the Annual Show, with considerable concerns that Sarah Cowper could walk away with the coveted shield for the third year in succession.  But it was not to be.  A very strong series of entries from Maggie Cassidy ensured the shield was hers. In second place was John Mawer who’s overall score was boosted by a clean sweep in the Photography section. Vivien Forshaw took the Douglas Dean Rose Bowl for her superb exhibit of roses.   The prizes given by the Women’s Club were taken by Caroline Wright for the Floral Art section, and Gordon Rolfe in the Culinary Delights section.  (This was despite concern in the latter case that the alcohol content of one entry might have swayed the judges.) There were strong entries in the Children’s Classes with the overall prize being taken by Darcy Miller. The village was very appreciative that the prizes were presented by the newly appointed Mayor, Gbola Adaleke who attended with his wife.  Gbola, one of our lo
Post a comment
Read more

It's nearly Village Show time .....and time to put the Hallowe'en Party date in your diary.

Just in case you've lost your schedule you will be getting a copy delivered to you and it's here on the blog.  So no excuses!
Post a comment
Read more
More posts