Showing posts from October, 2017
Show All

Coming soon Halloween Party.......tickets will be available from your local village rep in the next few days. 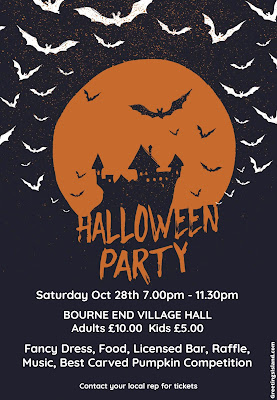 ..... and an early reminder of the Jazz Night on Friday 17th  November.  Make sure you get it in your diary. The Bourne End Village Association AGM was held last Friday along with the Village Hall AGM.  the Chairman's report is below. CHAIRMAN’S AGM REPORT -  OCTOBER 2017   After four years as Chairman of the Association I have decided it is time to retire and my wife, Jean, who has been secretary for the last five years has also decided to retire.   I would like to thank her for all the hours of work she has put in on behalf of BEVA and myself.   I feel it is time for a new impetus and change of direction.   I have enjoyed being Chairman of my favourite village – after all, I have lived here for fifty-five years and been associated with it for sixty-six.   I would also like to thank the BEVA Committees over the past four years for all their hard work and support, and especially Chris Hunt for standing in as Chairman when I was indisposed earlier this year.   I
Post a comment
Read more

October 11, 2017
Both these AGMs will take place in the village hall starting at 8.00 pm.  They will be followed by wine and cheese. Tickets for the forthcoming Halloween Party on Saturday 28th October will be available.  Adults £10.00 children £5.00
Post a comment
Read more
More posts