Showing posts from July, 2018
Show All

A follow up to the recent article in the Gazette 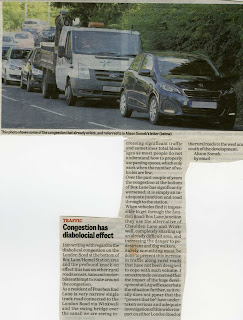 Alison from Pouchen End has added to the awareness of the problems caused by using the lanes as rat runs. We have yet to see any suggestions for how these lanes will be protected when 900 or 1,100 or 1200 houses are built at LA3.  The Master Plan claims to 'maintain the rural character of Pouchen End Lane and Chaulden Lane.' ... we wait.....
Post a Comment
Read more

LA3 in the News 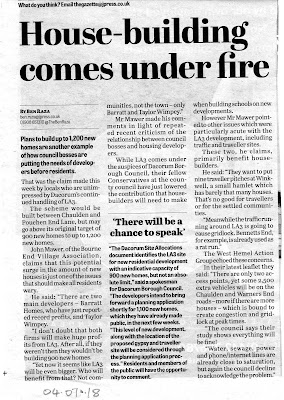 If you don't take the Gazette, you may have missed these pieces of news.   In last week's edition it was reported that Hertfordshire County Council had agreed to reduce the amount that developers were asked to contribute towards the cost of building new schools.  This seemed very odd to many people at a time when developers are making healthy profits and schools are strapped for cash. (For those of us involved in education, the comment about the impact is particularly odd.) The article is shown below. It has produced a number of letters which appear in today's Gazette. Of course, this has a bearing on LA3 which is planned to include a primary school.  It sounds as if the developers are again finding a way to minimise costs and maximise profits. Again? Increasing the number of houses crammed in obviously increases profitability as does ensuring that the traveller site is effectively kept away from the development.   It seemed timely to talk to the press about ou
Post a Comment
Read more
More posts