Showing posts from April, 2019
Show All

Spring Clean the Village - views from the litter pick 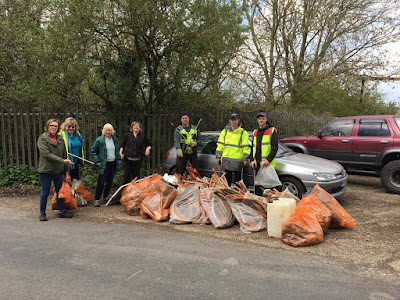 Thank you to the 18 volunteers who turned out to clear up the verges, the towpath and the lanes.  In all, 56 bags of rubbish were collected. Some of this was from fly-tipping on the hard standing at the north end of Pix Farm Lane.  We are particularly grateful to the team from MacDonalds who are sensitive to the fact that much of the litter problem, especially in Upper Bourne End Lane, is caused by their customers. They do employ someone to go out and collect rubbish every day, but it seems this is not enough to counter the wave of refuse from all the activity in that part of the village. It was a productive morning and Jenny from the Anchor rewarded us all with coffee and a chance to sit and chat.   Many thanks everyone.
Post a comment
Read more

Reminder to Register your Objections to LA3

It is extremely important that as many voices as possible are heard.  This flyer, which was delivered to each house last week, sets out very clearly exactly how to do this.  Please set aside just a few minutes today to have your say...
Post a comment
Read more

Results of the Petition to Close the Lanes

April 09, 2019
Below is the text of letter that the Village Association is sending out to the relevant authorities. Note that not a single resident declined to support the petition. "You are aware of Bourne End Village Association's proposals for managing traffic particularly in Winkwell on the grounds of safety for pedestrians and cyclists as well as reduction in vehicular traffic on rural lanes used as rat runs. We have been acutely conscious of the fact that, for our community, the traffic situation needs managing now, before the major additional development of LA3 arrives on top of the development of the Buttons site in Pix Farm Lane. Over 80% of our community have expressed support for our plans by signing a petition circulated in the village. We are reporting this to you now in the hope that it will lend support to discussions that will further the implementation of traffic calming measures in Bourne End. We will continue to canvas the village community because not all dwellings
Post a comment
Read more
More posts